Sonam Bajwa birthday was on 16th August 1989. She was born in Nainital, Uttarakhand, India. She is an Indian based Film Actress, Air Hostess & Model working in Punjabi Cinema. She is known for her Superhit Punjabi films "Punjab 1984", Nikka Zaildar, Guddiyan Patole & many more.

Disha Patani of Punjabi Film Industry, Sonam Bajwa is the popular actress & model of Punjabi Industry especially. The full name of Sonam Bajwa is Sonampreet Kaur Bajwa. Punjab’s famous actress is basically from outside Punjab; Rudrapur, Uttarakhand. Her schooling was done from Jaycees Public School of Rudrapur. Sonam did her graduation from Delhi University.

After completing graduation, Sonam went to Mumbai for making her career in the Film Industry. There she participated in the Miss Femina India contest in 2012. Before doing acting in movies, Sonam did a job as an Air Hostess to fulfill her expenses but her first love was acting & modeling so she tried in these along with her job. Sonam Bajwa was first nominated for the Bollywood movie ‘Happy New Year’ but unfortunately, she was not selected in the cast of that movie. Sonam made her debut in acting through a Punjabi movie ‘Best of Luck’ with Gippy Grewal in 2013. Binnu Dhillon, Simran Kaur Mundi & Jazzy B were also part of this movie. Best of Luck movie gave Sonam a good breakthrough in Punjabi Cinema.

In 2014, Sonam Bajwa was the lead actress of Punjabi movie “Punjab 1984” with Diljit Dosanjh. Her role in this movie was highly appreciated by the audience and she established herself as a top actress of Punjabi Cinema. In this year, she also appeared in a Tamil language movie “kappal”, this was her debut in South Indian Film Industry. 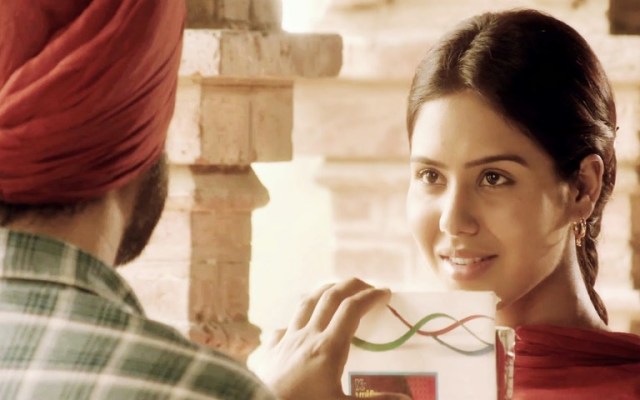 Sonam Bajwa played the role of Diljyot in Punjabi movie “Sardar Ji 2” with Diljit Dosanjh in 2016. This year, she made her Telugu debut with the movie “Aatadukundam Raa”. The most successful movie of Sonam Bajwa's career is "Nikka Zaildar". The chemistry of Ammy Virk & Sonam Bajwa was loved by the audience in this movie. Sonam did the role of ‘Manraj’ in this movie and her role was just Wow. Sonam received too much positive response & appreciation for this movie & the movie was the blockbuster movie of 2016.

After the success of Nikka Zaildar, Sonam gave her full focus on Punjabi Industry. She did many superhit movies back to back in Punjabi cinema. Some of her movies as a lead actress are Super Singh, Nikka Zaildar 2, Carry on Jatta 2, Manje Bistre, Muklawa, Singham, etc. Her movies “Guddiyan Patole” & “Ardab Mutiyaran” were her most favorite movies. In these movies, a different zoner of Sonam Bajwa’s acting was shown on the silver screen.

Sonam Bajwa made her Bollywood debut in 2017 with the movie “Takadum”. In this movie, she was performed with Sushant Singh Rajput and Parineeti Chopra. Sonam has also worked as a model in many Punjabi Music Videos. Her song “Jean” with Diljit Dosanjh was the most popular song of her as a Model. In 2020, Sonam has appeared in “Jinde Meriye” Punjab Movie with Parmish Verma & her movie “Puaada” is set to release in summer 2020.

Sonam Bajwa is a die-hard gym lover & dog lover. She often was seen doing the workout in the gym. She has a cute dog “Simba” also. Sonam Bajwa is super active on social media, she keeps posting her gym videos on her Instagram regularly. Rumors were also there for Sonam Bajwa that she was in a relationship with Cricketer K. L. Rahul. It was the hard work & talent of Sonam that she is the most expensive actress of Punjabi Cinema.

Has 1 Facts
1. Sonam Bajwa started her career as an Air Hostess.
2. In 2012, She participated in Femina Miss India Contest.